Interview with a semicolon

Gething:  Thank you for agreeing to this interview.

Semicolon:  The pleasure’s all mine; thank you for having me.

Gething:  My interest is in the controversy you have stirred in the literary world.

Semicolon:  I’ve done no such thing; those who don’t use me seem to be causing all the fuss.

Gething:  That’s my point. Many modern writers, in particular Cormac McCarthy in his interview with Oprah, have called for your extinction. What did you do to create such a virulent reaction?

Semicolon:  Ask Mr. McCarthy; to my knowledge I did nothing.

Gething:  But you must have done something. He’s not calling for the elimination of the period or the question mark, or even the colon in certain instances.

Semicolon:  No, he seems to have targeted me in particular…and the exclamation mark; I don’t know what we did to deserve such enmity. My purpose seems quite clear—to connect two or more independent clauses more closely than ones separated by a period. I believe there’s still a place for that in the world.

Gething:  You do have some supporters, only—let’s be honest—not too many users today.

Semicolon:  Not true! A very lucid writer recently defended me in the New York Times.

Gething:  But he also quoted Vonnegut who said that semicolons are “transvestite hermaphrodites representing absolutely nothing.”

Semicolon:  That’s a gross exaggeration. Henry James adored me; incidentally, many consider him the paradigm of subtlety; he was certainly more subtle than that Vonnegut fellow.

Gething:  Yes, but there is a modern sentiment that long sentences connected by semicolons obscure rather than make thoughts clearer. I sometimes feel that way about Henry James. Modern writers—journalists, novelists, poets—they tend to shun you.

Semicolon:  Well, what do you expect from poets?

Gething:  What do you mean?

Semicolon:  They are barbarians; they hardly use any punctuation at all.

Gething:  Doesn’t that suggest that meaning can be received without punctuation? Its absence might even create interesting double meanings.

Semicolon:  You mean vagueness and ambiguity. Perhaps that’s modern, too.

Gething:  McCarthy says, if you write clearly you don’t need more than a few punctuation marks.

Semicolon:  Then why use any at all? Why not write so clearly that periods and commas can be avoided as well? Isn’t punctuation simply a convention to help the reader comprehend the writer’s meaning? What if you presented these words without punctuation?

A few awkward spots but I might get used to it with practice.

Semicolon:  I suppose you’ll be calling for the elimination of capital letters next. 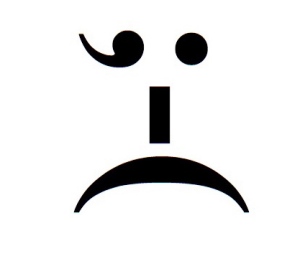 Semicolon:  I am bitter. I feel angry; I feel hurt; I feel betrayed. In speech we use pauses and intonation to convey meaning. Why can’t we rely on perfectly acceptable conventions of punctuation, including the semicolon, for the printed word?

Gething:  You make a good case, but it seems convention is dictated by usage not by argument. I fear for your longevity.

Gething:  You know, my sister quit dating a guy who used semicolons; she said he never knew when to stop.

Semicolon:  Then start by using me more; only please, don’t abuse me!

297 responses to “Interview with a semicolon”