Last year, after backpacking for days through the bright white granitic rock in the high country of the Sierra Nevada, my friends and I began descending to our point of departure near Bishop, California. As we made our way down Piute Canyon, we began to see outcrops of sedimentary rock, weathered bluffs so red they might have been out of a Georgia O’Keefe painting. This startling contrast got me wondering how that red rock got there. 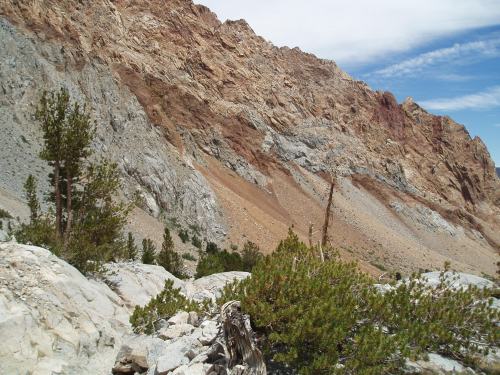 Annals of the Former World, John McPhee’s vast, extensively researched collection of five books about the geology of the continent, answered my question. In the fourth book of the series, Assembling California, he writes: “Soon we were dropping toward two thousand feet, among deeply weathered walls of phyllite, in color cherry and claret—the preserved soils of the subtropics when the unrisen mountains were a coastal plain. Geologists call it lateritic soil, in homage to the Latin word for brick. All around the Sierra, between two and three thousand feet of altitude, is a band of red soil, its color deepened by rainfall that leaches out competing colors and intensifies the iron oxide.”

The Sierra Nevada is a young mountain range, the result of the Pacific Plate colliding and grinding against the North American Plate. The range began lifting some three million years ago like “a raised trapdoor,” according to McPhee, sloping gently to the west toward its hinge somewhere under California’s Central Valley and with “a plunging escarpment facing east.” It’s still rising. 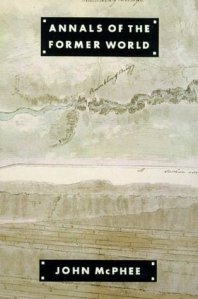 Written over a span of twenty years, between 1978 and 1998, McPhee’s Annals is a chronicle of geologic discovery. The book began as a series of New Yorker articles in which he set out to describe a geologic cross section of the continent by traveling along Interstate 80. In the process, McPhee not only ranged across thousands of miles but billions of years. His attention turned inevitably to the revolutionary theory of plate tectonics that was then shaking up the field. Imbedded in his subject like fossils layered in stone was the history of our growing understanding of the earth’s mechanics.

In the first book of the series, Basin and Range, McPhee crosses Nevada with Princeton University geologist Ken Deffeyes. Stopping at road cuts to inspect the exposed rock strata, Deffeyes explains the basic concepts of plate tectonics, which leads McPhee into the history of geology as a science and the pioneering observations of James Hutton. In Scotland, in 1785, Hutton shook up the established order by asserting that geologic evidence showed the world to be much, much older than the 4,000 years theologians, basing their claims on biblical scholarship, reckoned it was. The development of plate theory in the last half of the 20th century was just as unsettling, finding staunch proponents and skeptical opponents in the 1960s and 1970s.

Much still needs to be learned about the earth’s core, mantle and crust, the vulcanism of hot spots and the movement of continental plates, but plate tectonics are now accepted as the geologic engine of mountain formation, continental drift, the spreading and subduction of the ocean floor, and the shattering earthquakes that occur where plates meet.

Today, you can watch a fifty-minute National Geographic video on YouTube that explains, somewhat sensationally, the latest thinking on plate tectonics. But what McPhee managed to capture in his twenty-year project was the fascinating intellectual chase of the scientists who helped establish the theory. In Suspect Terrain, the second volume in the series, looks at anomalies in the Appalachians with Anita Harris, a skeptical petroleum geologist, as McPhee’s guide. In Rising from the Plains, David Love pieces together the puzzling results of mountain formation and the disappearance of ancient oceans in Wyoming as plates collided. In Assembling California, Eldrige Moore carries on where Ken Deffeyes left off, addressing the seismic activity that has shaped, and is still shaping, the West Coast. And finally, in Crossing the Craton, Randy Van Schmus helps unlock the secrets of the Canadian Shield, the Precambrian craton that runs beneath the Middle West and contains some of the oldest remaining rock in the world (3.8 billion years).

No one writes with more clarity and enthusiasm about arcane terrain than John McPhee. What could easily become dull or geeky in others’ hands is a lively and at times humorous account of numerous road trips with brilliant, eccentric geologists who dedicated their lives to their science. By shadowing the men and women who have been leaders in their respective fields, McPhee delivers insights on the powers of observation, trial and error, multi-dimensional problem-solving, perseverance and obsession, and the iconoclasm that breeds breakthroughs. Being a geologist apparently leads to ambivalence about things that appear solid if not permanent, conflicted attitudes regarding man’s impact on the environment, and a changed perspective on time.

There are moments in this book that truly highlight our insignificance in the scheme of things. Just as new telescopes have revealed the mind-boggling expansiveness of the universe, improved isotopic dating techniques have shown how old our planet is. Great mountain ranges have risen and crumbled and been overlaid by new mountains. Continents have amassed and split apart and amassed again. Oceans have widened and narrowed and disappeared. Mass extinctions have occurred numerous times and may well happen again. As McPhee so eloquently tells us, time functions on two very different scales, the human and the geologic:

“In like manner, geologists will sometimes use the calendar year as a unit to represent the time scale, and in such terms the Precambrian runs from New Year’s Day until well after Halloween. Dinosaurs appear in the middle of December and are gone the day after Christmas. The last ice sheet melts on December 31st at one minute before midnight, and the Roman Empire lasts five seconds….Geologists live with the geologic scale. Individually, they may or may not be alarmed by the rate of exploitation of the things they discover, but, like the environmentalists, they use these repetitive analogies to place the human record in perspective—to see the Age of Reflection, the last few thousand years, as a bright sparkle at the end of time….

The human consciousness may have begun to leap and boil some sunny day in the Pleistocene, but the race by and large has retained the essence of its animal sense of time. People think in five generations—two ahead, two behind—with heavy concentration on the one in the middle. Possibly that is tragic, and possibly there is no choice. The human mind may not have evolved enough to be able to comprehend deep time….Geologists, dealing always with deep time, find that it seeps into their beings and affects them in various ways. They see the unbelievable swiftness with which one evolving species on the earth has learned to reach into the dirt of some tropical island and fling 747s into the sky. They see the thin band in which are the all but indiscernible stratifications of Cro-Magnon, Moses, Leonardo, and now. Seeing a race unaware of its own instantaneousness in time, they can reel off all of the species that have come and gone, with emphasis on those that have specialized themselves to death.”

John McPhee’s Annals of the Former World shows geology as a heroic quest for knowledge and geologists as heroes who have rewarded us with a deeper understanding of the world and of mankind’s tenuous place in it.

12 responses to “Geologists as heroes”